We are interested in understanding how organisms diversify in nature. Research projects in the lab are diverse and include studies of the evolution of body form of closely related fishes adapting to different habitats, the effects of environmental change on developmental processes, the impact of human-mediated habitat transformation on fishes, and the evolutionary history and population genetic structure of Neotropical fish species. A major focus of the lab involves studying the integration of the axial skeleton and body form during adaptation to changing habitat conditions, the functional significance of these morphological changes, and the underlying developmental mechanisms. The lab is also conducting basic research on the ecology and evolution of freshwater fish species in northwestern South America.
​
Some ongoing projects are highlighted below.
Adaptation and speciation along elevational gradients in Andean Mountain streams: Insights from the endemic Rainbow Characin (Characidae: Rhoadsia).

Environmental conditions tend to change significantly with elevation in predictable ways. Western Ecuador harbors a large number of relatively small rivers that drain independently from the Andes to the Pacific Ocean, providing a replicated natural experiment to study how aquatic species adapt to changing conditions in mountain streams.

Rhoadsia is a genus in the family Characidae (tetras) that is endemic to western Ecuador and northwestern Peru. It has a deep body, a large black spot along its flank, and exhibits extreme sexual dimorphism. Males grow larger than females and develop bright red and iridescent breeding colors as well as extremely elongate dorsal and anal fin rays. There are two recognized species in the genus, R. altipinna described from lower elevations in southwestern Ecuador, and R. minor described from high elevations (>1200 m) from northwestern Ecuador in the Esmeraldas River drainage. There are some minor differences in morphology between species, especially in body shape. Rhoadsia altipinna is deeper bodied than R. minor. It is now clear that R. altipinna can occur to at least 1100 m in southwestern Ecuador (Jubones drainage) and R. minor occurs to almost sea-level in the Esmeraldas drainage, thus the elevational distributions of the two species broadly overlap (Malato et al., 2017). Their morphology also changes in parallel with elevation within drainages. Although R. minor at high elevations of the Esmeraldas drainage is much more extreme, body shape becomes more streamlined with elevation in both species  (Aguirre et al., 2016; Malato et al. 2017). Vertebral number is also greater in populations located at higher elevations (Aguirre et al., 2019). The two described species are closely related genetically (Cucalón et al., 2022). Our lab is studying the adaptive and genomic basis of evolutionary diversification of Rhoadsia in western Ecuador.

​Fig. 1. A. Male (top) and female (bottom) Rhoadsia altipinna from southwestern Ecuador. B. Depiction of body shape variation with elevation in Rhoadsia modified from Malato et al. (2017).
Temperature effects on somitogenesis, body shape, and the development of the axial skeleton in the Mexican tetra Astyanax mexicanus

​The Characidae (tetras) are the most diverse family of freshwater fishes in the Neotropics. Our lab is interested in understanding the role that environmental variation during development has on the production of phenotypic variation in characids, and how this in turn may influence the evolutionary trajectory of species adapting to new or changing environmental conditions. We are particularly interested in the impact of temperature because few factors have a greater influence on the phenotypic properties of ectotherms and because of the growing environmental problems associated with global climate change. Temperature variation during embryogenesis is also known to impact adaptively important traits like vertebral number and body shape, which has important fitness consequences (Reyes and Aguirre, 2019). 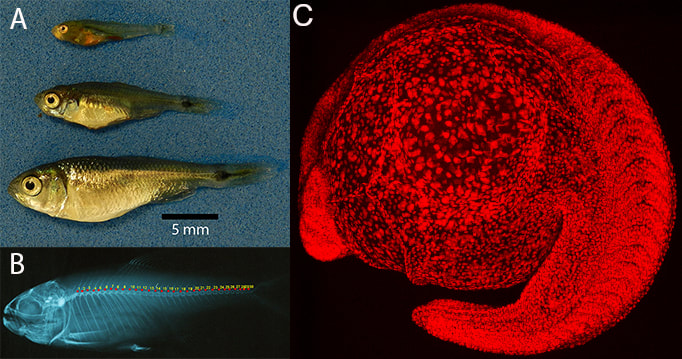 Fig. 2. A. Effects of temperature on growth of Astyanax mexicanus. Siblings 22 days old grown at 20 (top), 24 (middle) and 28 (bottom) degrees celsius. B. Radiograph of a specimen of A. mexicanus. Numbers indicate individual vertebrae not counting the weberian apparatus or the urostyle. C. Confocal microscopy image of an A. mexicanus embryo stained with Dapi.
​The impact of temperature induced vertebral anomalies on swimming performance in Astyanax mexicanus (Teleostei: Characidae)

​Our previous work has shown that elevated developmental temperatures result in high frequencies of vertebral anomalies in the Mexican tetras (Reyes and Aguirre, 2019). We are currently studying the effects of temperature induced vertebral anomalies on fast-start swimming performance. When confronted with a threat from a predator, fish have a characteristic burst swimming reaction to help them escape that involves the bending of the body. This is called a fast-start reaction. Vertebrae play a key role in the bending of the body during the fast-start reaction and temperature is known to impact vertebral number.  So changes in water temperature may significantly impact the ability of species to escape predators, compromising the probability of their persistence. This project aims to quantify the impact of elevated temperatures on the fast-start reaction of the Mexican tetra, and examine how different types of vertebral anomalies in different parts of the axial skeleton impact swimming performance.
​
DNA Barcoding of the freshwater fishes of Western Ecuador

​Western Ecuador is among the areas with the highest rates of freshwater fish endemism in South America. Unfortunately, fishes in the region are under severe pressure from habitat destruction and degradation, pollution from agriculture, mining, human settlements, overexploitation, dam construction, etc. (Aguirre et al., 2021). Very little is known about most species and there are relatively severe taxonomic issues in many groups.

DNA barcoding is the use of the sequence of a particular gene, like the mitochondrial COI or 12S genes, as a species identifier.  This methodology can be extremely helpful for species identification and delimitation. Our lab is using traditional Sanger sequencing and relatively new real-time Nanopore sequencing to barcode the freshwater fishes of Western Ecuador. We hope to help resolve some of the existing taxonomic issues by establishing a genetic database of all freshwater fish species from western Ecuador.
​ 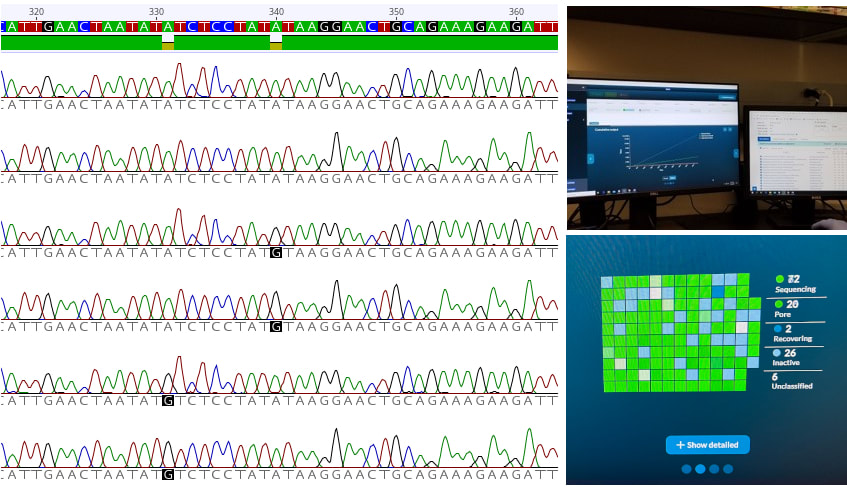 One of the predicted effects of human-induced global climate change is a rise in sea levels. Low elevation coastal areas are in danger of  incursion of sea-water. The region around Guayaquil in western Ecuador includes areas with freshwater rivers at very low elevation. The freshwater organisms in these areas are in danger of being strongly affected by the incursion of sea water over the next few decades. Unfortunately, there is very little known about the freshwater fishes occurring in these areas. Our lab is using eDNA (environmental DNA) to map the distribution and abundance of some ecologically important freshwater fishes in parts of southwestern Ecuador threatened by coastal incursion, and to examine the magnitude of genetic divergence between populations in areas close to sea level vs. populations of the same species located 100-300 above sea-level that are safe from coastal incursion.
Ecology and evolution of the freshwater fishes of western Ecuador

​Our lab also maintains an active research program studying general aspects of the ecology and evolution of the freshwater fishes of western Ecuador.  We hope to contribute to fill in gaps in knowledge of the fishes in the region. We are working on several projects in Western Ecuador with an emphasis on endemic species. Our research includes:
1. The evolution of miniaturization and phylogenetic placement of the endemic tetra Iotabrycon praecox
​
Iotabrycon praecox is an endemic species and genus from western Ecuador that only grows to about 25 mm in length. This is much smaller than most other tetras in the region and makes it one of the smallest fish species in Ecuador. Very little is known of its basic ecology or phylogenetic relationships. We are examining skeletal variation in this species using micro-CT scanning technology to examine how miniaturization has affected its skeleton. We are also using DNA sequencing to examine its phylogenetic position within the Characidae. 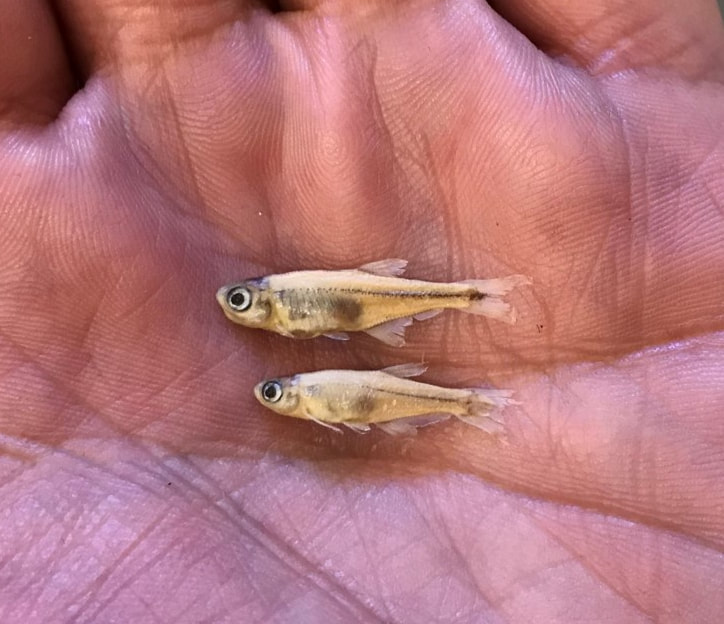 Pseudochalceus is likely an ancient characid genus that is not common in western Ecuador. It can be distinguished from other small tetras occurring in Ecuador by its body form, large mouth, and coloration. Specifically, it has a series of longitudinal stripes running along the length of its body, which are not present in other tetras in the region. Pseudochalceus lineatus is most common in northwestern Ecuador in the Esmeraldas river basin. It is rare in the Guayas basin and rivers south of the Guayas, and is typically collected in small numbers on rare occasions. Our lab is using DNA sequence data to examine the genetic relationships of specimens collected since 2008 in southwestern Ecuador. We are especially interested in the magnitude of genetic divergence between populations in the Esmeraldas (northwestern Ecuador) and Guayas (southwestern Ecuador) basins to verify whether these populations belong to the same or distinct species. 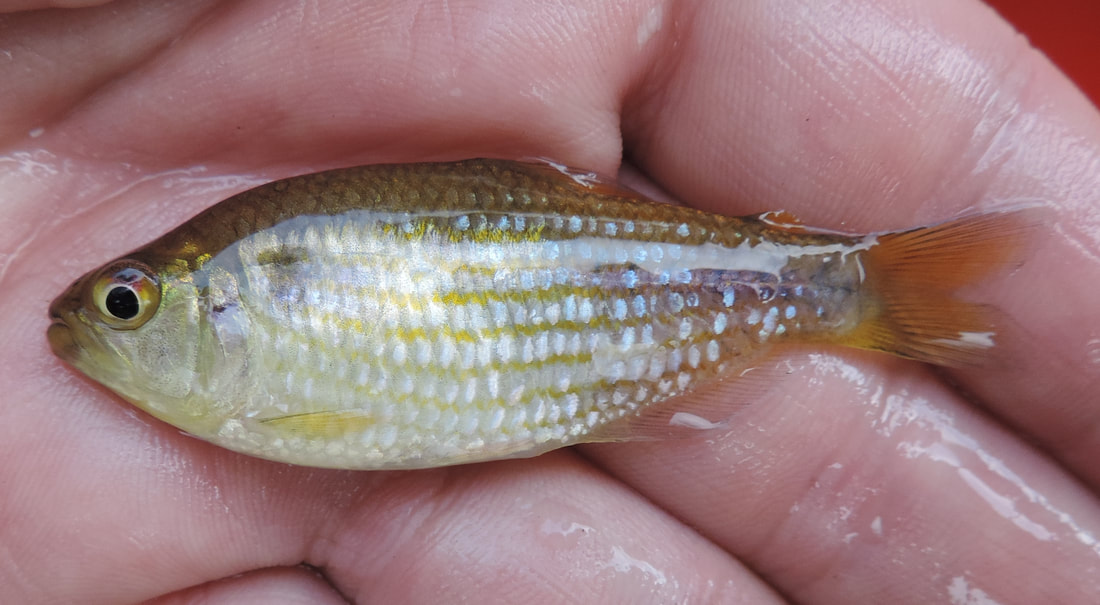 Our lab maintains a web page summarizing information on the fishes of western Ecuador: